Sauchiehall Avenue, on Sauchiehall Street between Charing Cross and Rose Street, the first of the 'Avenues' to be delivered across Glasgow city centre in a £115million programme - the biggest of its kind in the UK - funded by the Glasgow City Region City Deal, is now complete. 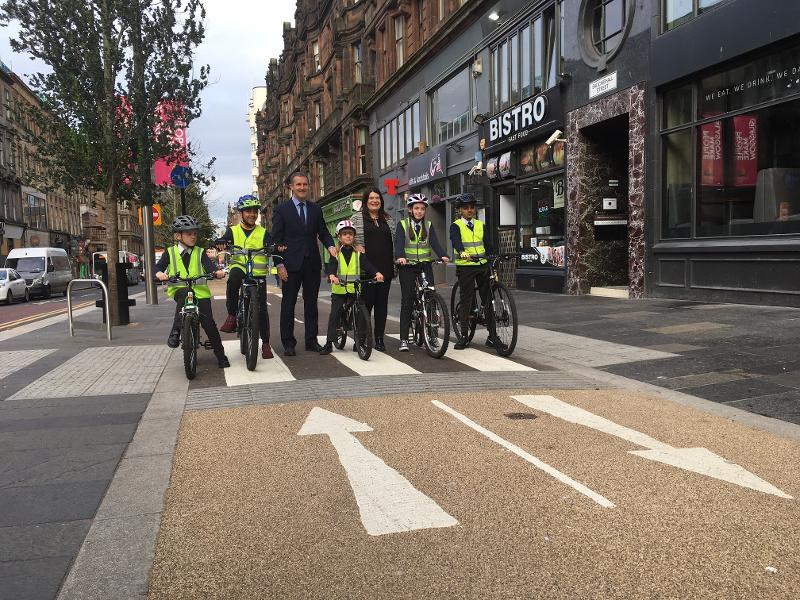 The project was designed and delivered after consultation and collaboration with local residents, businesses and organisations, and aims to regenerate this part of one of the most recognisable streets in Glasgow and Scotland.

Sauchiehall Avenue has significantly improved the physical environment of this east/west corridor which - at Charing Cross - acts as a gateway to the city centre, and the project improves connectivity and access between and to the many businesses, offices, bars, restaurants, venues, shops and other attractions in the area.

The £115million Avenues programme is a quality place-making scheme that will transform 17 key streets and adjacent areas in Glasgow city centre through the introduction of an improved environment that will rebalance traffic modes, introduce green and smart infrastructure, with its design placing people firmly at the heart of the project.

The strategic need for Sauchiehall Avenue and the Avenues programme has its roots in the economic crash of 2008 and the subsequent impact on city centres and their retailers in particular. The programme is a part of the response to these issues, and will help to allow the city centre to be competitive - it remains the UK's biggest retail destination outside the West End of London - and continue its development and attractiveness to everyone who uses it as a place in which to live, work, study, shop, eat, drink, visit or invest.

The Avenues programme adopts the principles set out in 'Designing Streets' - the first policy statement in Scotland for street design. The document encourages designers to reverse the existing road hierarchy to place people firmly at the heart of street design. All of the appropriate guidance and recommendations, statutory and endorsed by vulnerable user groups like the Guide Dog Association, are being followed.

In addition, Road Safety Audits (RSAs) will now be carried out, in collaboration with a Sauchiehall Avenue monitoring plan which will allow for further engagement with vulnerable user groups. The results will be used to evaluate the overall success of Sauchiehall Avenue and will identify if further improvements are required.

Councillor Susan Aitken, Leader of Glasgow City Council and chair of the Glasgow City Region Cabinet, said: "The completion of Sauchiehall Avenue is a milestone in the rebirth of this famous Glasgow thoroughfare and the first stage in the biggest re-imaging and re-modelling of our city centre streets since the pedestrianisation of Buchanan Street 40 years ago. We've created a physical environment which will be the catalyst for social and economic benefits, improving Sauchiehall Street's overall look and feel and helping it adapt to the changes affecting high streets everywhere. It's now a street where pedestrians, cyclists and vulnerable road users are prioritised over the car, a safer, cleaner, more vibrant space which is attractive to both visitors and investors. The wider Avenues project - the biggest such scheme in the UK - will help us to both make the most of the fantastic economic potential of so many districts in the city centre and meet the challenges facing it."

Cabinet Secretary for Transport, Infrastructure and Connectivity Michael Matheson said: "I'm delighted to see that the results of our £500 million investment into the Glasgow City Region Deal's Infrastructure Investment Fund are beginning to be seen. We are committed to developing an Active Nation, where more people have opportunities to walk and cycle than ever before. This is an example of additional investment in high quality active travel infrastructure over and above the £80 million we spend every year. The rate of cycling into Glasgow City Centre has more than doubled since 2009 and the Avenues project will build on this demand and accelerate this positive rate of change. I look forward to seeing the city continue to transform as both residents and businesses take advantage of the opportunities it will create."

UK Government Minister Colin Clark said: "I'm delighted that the regeneration works for Sauchiehall Avenue on one of Scotland's most famous streets are now complete and that businesses, shoppers and residents can enjoy the improvements. Glasgow is a world-class city and quality enhancements such as these reflect its global status.  This is just the beginning of a £115 million programme to transform public spaces across the city that the UK Government is jointly funding. I look forward to seeing this - and the fruits of our wider £500 million Glasgow City Region City Deal investment - boost the area. To date, the UK Government has committed £1.4 billion investment for city and region growth deals across Scotland delivering jobs, opportunities and sustainable growth."

More detail on the Avenues programme in Glasgow city centre is available at: www.glasgow.gov.uk/avenues.