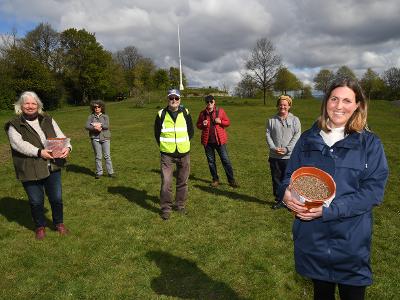 Work to create 30,000 square metres of wildflower meadow in Glasgow's Queen's Park has begun as part of a project to establish the city's first pollinator park.

Councillor Anna Richardson, City Convener for Sustainability and Carbon Reduction, and volunteers from the Friends of Queen's Park group sowed wildflower seeds across specially cut strips of ground in the south-east corner of the park that will eventually become habitats for a range of pollinator species over the forthcoming summer months.

The sowing of the wildflower seeds is the first step in wider project to increase the terrain available to pollinator species such as bees, butterflies, beetles and moths and to help them thrive. A three-year programme of bulb planting in Queen's Park is due to begin this Autumn to ensure there are sources of food in the park for early season pollinators by Spring 2022.  Plans for additional tree planting within the park are also being put in place.

Councillor Richardson described the pollinator park project as part of the council's response to the declaration that Glasgow is facing an ecological crisis in step with the climate emergency. The pollinator park project, she said, is about strengthening habitats for pollinator species within Glasgow and providing protection for our wider ecosystem. Encouraging wilder, more natural growth will also increase the points of interest within one of the city's best used open spaces while demonstrating that Glasgow parks can be managed more sustainably.

Councillor Richardson said: "Glasgow is currently home to over 6000 species of flora and fauna, but as is being witnessed all across the world, the habitats that support these species are increasingly under threat.

"The city's declaration that we are facing an ecological emergency as well as a climate emergency is a recognition that we need to do everything we can to preserve the biodiversity that supports our way of life. Creating wildflower meadows within our parks is a small step towards supporting the pollinators that constantly nurture the world we live in.

"Over the course of the pandemic we have seen how much people value the city's parks. By focusing more on biodiversity within Queen's Park people will begin to see changes to the park's environment that we hope will enhance their experience of being outdoors and bring them closer to the natural world.

"Extending the pollinator park idea to other parts of the city is something that we are keen to do and we will be working with the many groups that actively support Glasgow's parks to see where else this will be possible."

Queen's Park was identified as the ideal location for the project as it is already home to existing woodland that supports pollinators. But the park also has ample space within its 148 hectares that can be adopted for further growing and planting.

As part of the pollinator project, woodland within the park will be managed sympathetically to ensure dead and decaying wood is retained as a habitat for insects and other species, while ground flora and shrubbery will be retained as cover and nesting for small birds.  It is also envisaged that the park can host new food growing opportunities with the possibility of a community garden or orchard being looked at.

Wildflower meadows thrive in low nutrient soil and so there is no requirement to add fertiliser or any other feed to encourage the flowers to grow.