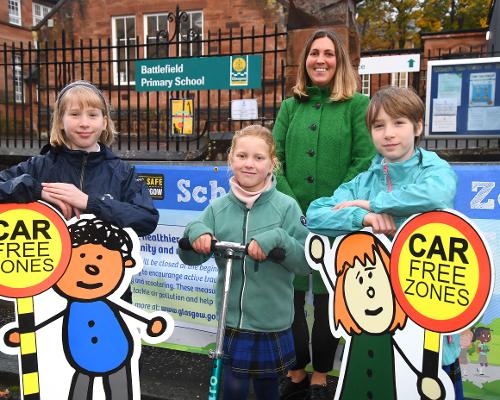 Up to thirty primary schools are set to be included in Glasgow's school car free zone scheme with new zones to be installed over the course of the next academic year.

School car free zones were first introduced in Glasgow in August 2019 when six primary schools were included in a pilot programme.  Following the early success of the scheme and in response to demand from school communities, a further 19 zones were subsequently introduced on a temporary basis as part of the Spaces for People programme.

The zones prohibit unauthorised vehicles from being driven close to school gates at the beginning end of the school day. Research has found there has been a substantial drop in traffic around the participating schools when the restrictions are in force with people feeling safer and more likely to engage in active travel.

Developed as part of the School Streets road safety programme, ten schools will have a zone up and running by August when pupils return after the summer break. Then over the remainder of the forthcoming school year it is intended that up to a further 20 zones will be introduced with the zones brought in over two phases - one in January and one after Easter. These schools will be announced in due course with consultation and engagement work currently underway

Councillor Anna Richardson, City Convener for Sustainability and Carbon Reduction, welcomed the continued roll-out of the School Streets programme as a way to improve road safety for children going to and from school.

Councillor Richardson said: "There has been a fantastic response to the introduction of the school car free zones. School communities are fully welcoming the safe space around the school gate that's being created by the School Streets initiative.

"By the end of the next school year we are aiming to have up to 30 more schools signed up to the scheme with car free zones in place and operational. Over the course of the next year we expect the number of schools with a car free zone to have effectively doubled.

"Our research is showing the car free zones are leading to significantly fewer cars at the school gate for when the bell goes, making it much safer for children to get to and from school. With calmer roads around those schools there are greater opportunities for children to come and go safely from school by walking, wheeling or cycling, which is great for health and well-being."

The zones are designed to prohibit cars and other vehicles from driving up to school gates between 8.30am and 9.15am and then 2.30pm and 3.15pm each week day during term time.

Blue badge drivers are exempt and residents within the zones will be issued with permits that allow them to park without penalty. But any other driver who enters the zone during the specified times can be fined £50 by police.

For those car free zones introduced on temporary basis as part of the Spaces for People programme, a full traffic regulation order will be required for those zones to become permanent.