Stunning public artwork to transform Anderston Station ahead of COP26 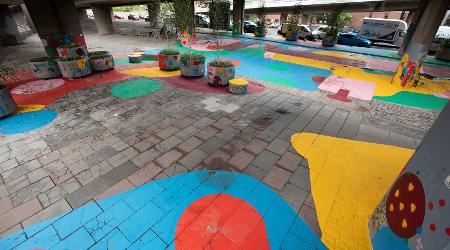 The city of Glasgow, today, 10 september 2021, in partnership with Bloomberg Philanthropies, announced details about a temporary public artwork at the entrance to Anderston Station that will improve pedestrian and cyclist wayfinding, revitalise the public space, and provide dynamic art for residents and visitors to enjoy.

With 50 days until the landmark Conference of the Parties (COP26) climate summit in Glasgow, UK, Bloomberg Philanthropies is collaborating with Glasgow City Council as host of the Climate Conference to help deliver a legacy for the city and its residents. Starting with an innovative Asphalt Art installation at the entrance of Anderston Station, Glasgow joins a select group of international cities supported by Bloomberg Philanthropies to transform and revitalise public spaces through the power of art.

Bloomberg Philanthropies' Asphalt Art Initiative is responding to the growing number of cities around the world embracing art as an effective and relatively low-cost strategy to activate their streets, with interventions on plazas and pavements, crossings and intersections, and other transportation infrastructure. The grant programme is designed not just to improve street safety and create vibrant public spaces, but also to build city capacity for working with artists and community groups on projects involving transportation infrastructure.

Over the coming weeks, residents of Glasgow will be able to witness their city become one of the most talked about in the world as it aims to be the linchpin for an ambitious global plan to tackle climate change. With participatory events and projects to be announced as it pushes towards this defining summit, the opportunities emerging from hosting COP extend far beyond staging an event for two weeks in November. 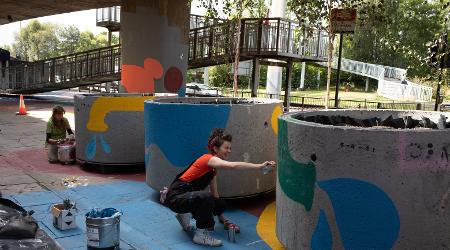 The design team led by Civic Engineers and designer Gabriella Marcella have worked to improve the connection to and from the city centre. Marcella's striking artwork, titled "Water Works," is painted on the ground and columns outside the entrance to Anderston Station below the M8 underpass.

The design was inspired by environmental challenges the city faces with excessive rain and water runoff, and the mural is accompanied the introduction of benches and an experimental raingarden on the site. As an attractive, low-maintenance way to reduce flood risk and treat surface water runoff from the nearby M8, a raingarden is a garden of native shrubs planted in a small depression, providing additional biodiversity and a greater sense of place to city centre streetscapes.

Deputy Leader of Glasgow City Council, Cllr David McDonald, said, "The Council has been delighted to partner with the prestigious Bloomberg Philanthropies on our journey towards COP26. We've engaged in a range of discussions on areas of shared interest about the environment, arts and culture, and community involvement.

"The climate emergency is an issue that can no longer be ignored and, whilst nation states will pledge in November, it is cities like Glasgow which will deliver. This innovative Asphalt Art installation will hopefully encourage conversations around the design of our cities and ways in which we can work together to reach net-zero by 2030.

"There are other projects underway which will be revealed soon, with Glasgow also benefitting from connecting with some of the world's biggest cities in the run up to and during COP through the C40 network, of which Michael Bloomberg is president.  This partnership work is a direct benefit of our host city role and is already delivering a legacy for Glasgow and Glaswegians."

Michael R. Bloomberg, founder of Bloomberg Philanthropies said "Asphalt Art Projects can help cities rebuild from the pandemic by reinvigorating streets and making them safer, while also lifting spirits. As we've seen through our work in cities around the world, vibrant public artwork and smarter street design can inspire residents, build relationships between artists and the community, and help cities recover stronger than before."

Designer Gabriella Marcella said "I'm delighted that the project is in its final stages, and the public have been able to see our work progress in real-time. It's been a challenging site to work across, but the giant graphics and colour have prevailed!

"I hope the finished work brings a smile to people's faces as they pass by, and encourages thoughts around water, and how we might rethink our relationship to it in our wonderful, and sometimes rainy, city!"

Isla Jackson, Director, Civic Engineers said, "This fantastic project helps to make this area a more inclusive, more climate resilient, safer place. It is a great example of true collaboration with the community and across industries, with everyone's contributions focused on improving connectivity between the west end and the centre and ultimately helping to make our city healthier and more attractive."

Meanwhile, around Anderston Station, it is hoped the completion of the artwork, addition of benches and raingardens will provide cheer to passengers and local alike as the city continues to re-open and recover from the pandemic.

About Bloomberg Philanthropies
Bloomberg Philanthropies invests in 810 cities and 170 countries around the world to ensure better, longer lives for the greatest number of people. The organization focuses on five key areas for creating lasting change: the Arts, Education, Environment, Government Innovation, and Public Health.

Bloomberg Philanthropies encompasses all of Michael R. Bloomberg's giving, including his foundation, corporate, and personal philanthropy as well as Bloomberg Associates, a pro bono consultancy that works in cities around the world. In 2020, Bloomberg Philanthropies distributed $1.6 billion. For more information, please visit bloomberg.org or follow on Facebook, Instagram, YouTube, and Twitter.

Glasgow City Council - COP26
The UK will host the 26th UN Climate Change Conference of the Parties (COP26). Proudly hosted in Glasgow on 31 October - 12 November 2021, the COP26 summit will bring world leaders and delegates together from around 120 countries to accelerate action towards the goals of the Paris Agreement and the UN Framework Convention on Climate Change.
At COP26 we will need to work together to protect and restore ecosystems, build defences, warning systems and resilient infrastructure and agriculture to avoid loss of homes, livelihoods and even lives as a result of ongoing climate change.