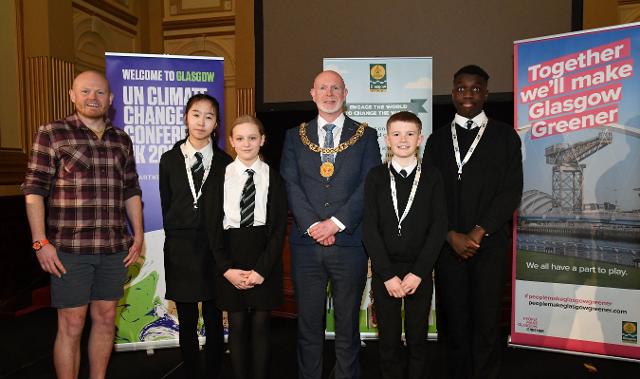 More than 60 young people from 28 schools took part in an event to mark the first 100 days since COP26 came to a close and the Glasgow Climate Pact was agreed.

During the session the young audience heard from their peers on several projects as part of Our Dear Green Place climate change related work, highlighting their achievements and sharing their learnings and experiences. The aim of the session was also for the young audience to be inspired to continue this work when returning to their own school.

The event was hosted by four pupils from Cleveden Secondary School.

Young people heard from the Dandelion urban growing project that demonstrated pretty much any space the schools have can be used to sow, grow and share food and ideas. They outlined their plan for the year including showcasing their growing cubes of perpetual light, holding harvest festivals and unexpected gardens that they hope many Glasgow schools will take part in.

Representatives who attend the Glasgow Schools' Young Persons' Forum talked about its work in launching a children's climate charter during COP26 and what the council has done in direct response to listening to pupils' suggestions and concerns, via the forum.

Lily Logan (12) from Cleveden Secondary who also helped host the event said; "The Glasgow Schools Young People's Forum has allowed me and my fellow pupils to have a voice and participate in climate conversations. It has been very fun and engaging. It was nice to work together with lots of other schools to discuss small changes we can make each day that can have a major impact."

Her Cleveden co-host Ivan Kaliganwa, said: "All the work leading up to and during COP26 has been a good opportunity to help me and other young people develop their voice and feel more confident discussing environmental concerns."

St Andrew's Secondary School described hosting of global visitors from India, Canada and the USA during COP26, taking part in a climate justice event hosted by Kelvin College and their work on becoming a UNICEF Rights Respecting school.

Wiktoria Krosny (16) from the school said: "Today's event has highlighted all the great work carried out by Glasgow schools and emphasises how changing little habits can have a big impact."

Kady Docherty (16) said: "Actions speak louder than words. Young people must continue to come together and act now to save our planet."

It was also announced that a relay to COP27 in Egypt will begin in Glasgow, in October. The 7,000km trip to the next COP hosts in Sharm el Sheikh will be broken down into smaller sections. It will take place over 729 stages running the 7000km, with 250,000 people taking on sections of the route carrying a baton with messages from children to world leaders, on climate change.

People will be able to track the baton's journey via a GPS tracker contained inside it and learn about the different countries that it passes through on its way to Egypt.

As he drew the event to a close Lord Provost Philip Braat said: "I saw today that our young people care deeply about climate change, the future of the planet and its people. Their immense energy and commitment shone through in their presentations.

"I saw first-hand during COP26 how heavily engaged our young people were, not only in having their voices heard, but also through direct action, demonstrating their green credentials.

"The challenge now is keeping momentum, but I feel certain, from what I heard today, that the learning for sustainability work is now firmly embedded in all of our schools. Our well informed and engaged young people are eminently equipped to make the right decisions for the future health of our planet and its global citizens."

During COP26 the council engaged with every single school in the city on discussions around climate change, sustainability and leadership in the months leading up to and during the event itself. This means that COP26 and the Dear Green Place programme has left a continuing legacy of climate conversations and learning for sustainability for more than 70,000 children and young people in Glasgow.