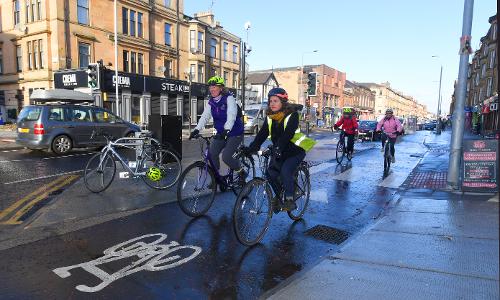 Just over £2m has been secured from Sustrans' Places for Everyone Fund to support the development of proposals for the City Network for walking, wheeling and cycling and the Liveable Neighbourhoods project.

The £2.1m grant will begin the process of implementing the delivery plan for the City Network by bringing further clarity to the network's overall route map and by creating more detailed plans for sections of the network in north and inner-south Glasgow.

A £180k portion of the grant will also support the development of concept designs for the Yorkhill to Anderson Liveable Neighbourhood, which will allow for further engagement with the community on how local streets can be designed to encourage people to see active travel as their first choice for transport.

Councillor Angus Millar, City Convener for Transport, welcomed the funding as another important step forward in Glasgow's plans to transform how people and goods move around the city as part of the effort to tackle climate change.

Councillor Millar said: "A huge shift in how we get about Glasgow is needed if we are to cut the carbon emissions produced by our transport network. The City Network and our Liveable Neighbourhoods programme will make active travel a far more attractive and accessible option and encourage a move away from our reliance on the fossil fuels that drive the city's vehicles.

"Both the City Network and Liveable Neighbourhoods are enormous undertakings but we are working our way through our plans step by step and making excellent progress. This work is fundamentally about improving the experience of walking, wheeling and cycling in our local neighbourhoods and connecting communities across the City.

"The funding secured from Sustrans will support the crucial design work to take these transformative projects further forward, and advance improvements to active travel infrastructure right across Glasgow."

The Liveable Neighbourhoods programme is Glasgow's direct response to the 20-minute neighbourhoods concept, which aims to create more attractive spaces in communities so everyday needs can be met more locally more easily.

Both the Liveable Neighbourhoods programme and the City Network are being developed through the standard process created by the Royal Institute of British Architects (RIBA).  The £2.1m funding package will allow work on the City Network route map to move to RIBA stage 1 while plans for north Glasgow and inner-south Glasgow will advance to stage 2 of the process.

Work on designs for north Glasgow and inner-south Glasgow will also link with other development work in these areas of the city, Spaces for People, existing infrastructure on the City Way cycle routes and previous Liveable Neighbourhoods engagement work. The Yorkhill-Anderston Liveable Neighbourhood plan will be taken forward to RIBA stage 2.

Highly technical plans are completed at RIBA stages 3 and 4, which allows construction to take place at RIBA stage 5.

The £2.1m funding package was formally accepted by the council following a decision by the City Administration Committee. See here for further details.