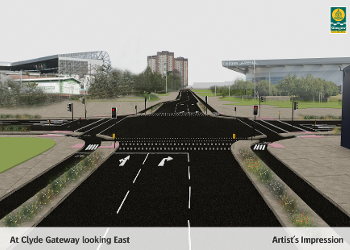 Work on a key section of Glasgow's emerging network of cycling infrastructure is now underway.

Construction on the extension to the East City Way, which will connect to the existing cycle lane on London Road and run from Fielden Street to Canmore Street,  began today (Thursday, January 19) and is expected to last for the next six months. This new section of  the East City Way will create a link between many East End communities and Glasgow Green, which in turn ensures a connection to the national cycle network and other sections of segregated cycle way that are being developed across the city.

Once complete, the work will provide a safer and segregated cycling route that passes both the Emirates Arena and Celtic Park. The work is scheduled to be completed in time for the beginning of the UCI Cycling World Championships, which start in August and will see events hosted at the Emirates Arena.

The design of the East City Way also includes improvements to junctions at Clyde Gateway and Springfield Road, which will improve safety for pedestrians but also allow vehicles to disperse more quickly on match days at Celtic Park and support transport arrangements for local businesses. Junctions on London Road at Fielden Street, McBeth Street and Canmore Street will also be upgraded.

Councillor Angus Millar, City Convener for Transport, hailed the start of the work on the East City Way extension as another important milestone in the creation of a City Network for active travel that takes in all areas of Glasgow.

Cllr Millar said: "This latest phase of the East City Way is an exciting development for cycling in Glasgow. Not only will the cycle way make it easier to get to two of Glasgow's major sports venues by bike, but the new route also shows the huge potential of our plans for a City Network for active travel.

"The East City Way strengthens the connection with other cycle routes in the city, such as the National Cycle Network and other City Ways, and that makes an increasing number of places in Glasgow accessible by safe, segregated cycle infrastructure from the city's east end. The more connections that are the made within the proposed City Network, the more attractive an option cycling will become for every day journeys.

He added: "The City Network is a crucial part of our plans to support a shift away from relying upon the fossil fuels that have driven climate change. Extending the East City Way is another big step forward in our efforts to create a more sustainable transport system for Glasgow."

The overall plan for the East City Way will deliver over 7km of safer, more comfortable active travel infrastructure between the city centre and the North Lanarkshire boundary, taking in communities such Bridgeton, Barrowfield, Braidfauld, Tollcross and Mount Vernon.

It is proposed that by 2030 plans for the City Network will add 270km of active travel infrastructure to over 300km of routes that already exist in Glasgow.

The 2023 UCI Cycling World Championships will be staged in Glasgow and other venues across Scotland from August 3-23. The Emirates Arena will host two championships - Artistic Cycling and Cycle-ball.

Funding for the new section of the East City Way has allocated from the council's capital programme for active travel projects.